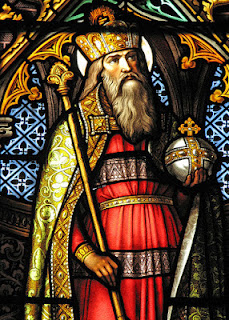 St. Henry
Henry, surnamed the Pious, Duke of Bavaria, became successively King of Germany and Emperor of the Romans; but not satisfied with a mere temporal principality, he strove to gain an immortal crown, by paying zealous service to the eternal King. As emperor, he devoted himself earnestly to spreading religion, and rebuilt with great magnificence the churches which had been destroyed by the infidels, endowing them generously both with money and lands. He built monasteries and other pious establishments, and increased the income of others; the bishopric of Bamberg, which he had founded out of his family possessions, he made tributary to St. Peter and the Roman Pontiff. When Benedict VIII, who had crowned him emperor, was obliged to seek safety in flight, Henry received him and restored him to his see.

Once when he was suffering from a severe illness in the monastery of Monte Cassino, St. Benedict cured him by a wonderful miracle. He endowed the Roman Church with a most copious grant, undertook in her defense a war against the Greeks, and gained possession of Apulia, which they had held for some time. It was his custom to undertake nothing without prayer, and at times he saw the angel of the Lord, or the holy martyrs, his patrons, fighting for him at the head of his army. Aided thus by the divine protection, he overcame barbarous nations more by prayer than by arms. Hungary was still pagan; but Henry having given his sister in marriage to its King Stephen, the latter was baptized, and thus the whole nation was brought to the faith of Christ. He set the rare example of preserving virginity in the married state, and at his death restored his wife, St. Cunigund, a virgin to her family.

He arranged everything relating to the glory or advantage of his empire with the greatest prudence, and left scattered throughout Gaul, Italy, and Germany, traces of his munificence towards religion. The sweet odor of his heroic virtue spread far and wide, till he was more celebrated for his holiness than for his imperial dignity. At length his life's work was accomplished, and he was called by our Lord to the rewards of the heavenly kingdom, in the year of salvation 1024. His body was buried in the church of the blessed apostles Peter and Paul at Bamberg. God wished to glorify His servant, and many miracles were worked at his tomb. These being afterwards proved and certified, Eugenius III inscribed his name upon the catalogue of the saints.

Symbols: Sword and church; lily; crown; dove on an orb; model of Bamburg cathedral.
Posted by sthenrybp.blogspot.com at 22:48

Email ThisBlogThis!Share to TwitterShare to FacebookShare to Pinterest
Labels: Saints

The Church of St Henry was Blessed and Opened by the Most Reverend M.Olcomendy, D.D. Archbishop of